FRANdata has continued to test and review the FUND Model to ensure it provides the best possible measure of franchisor risk available to lending institutions. Applying this model to more than 500 brands, the predictable pattern between loan performance and FUND credit scores continues, while being fine-tuned for 2020.

For the purpose of this analysis, FRANdata examined seasoned loans (SBA backed loans booked between 2011 to 2015) to determine the predicted loan success rate by a brand’s FUND score. The charge-off rate for franchise loans originated in 2011, 2012, and 2013 track with the rest of SBA’s non- franchise loan portfolio. The 2014 and 2015 books have underperformed the non-franchise portfolios. 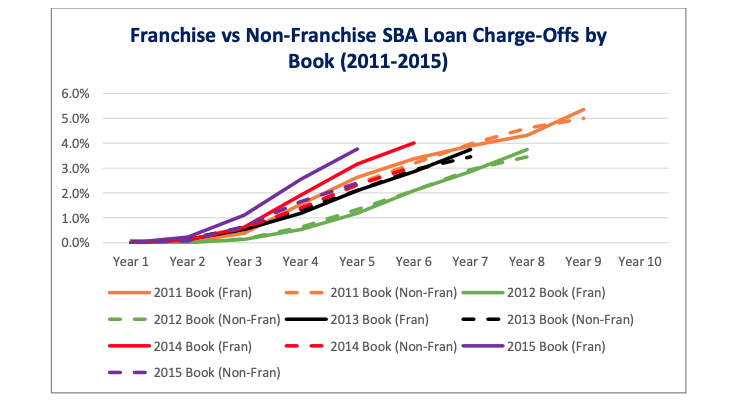 Based on this analysis, FRANdata has recalibrated loan performance expectations based on the new data:

The FUND score is predictive of loan performance with a .61 correlation between the two values. The >.5 correlation highlights the predictive value of the FUND score. As we enter a period with increasing charge-offs and more economic instability, understanding the risk the franchisor presents to franchisees is of growing importance in accurately assessing the riskiness of a potential borrower.

« How to Create your Brand’s Recovery as the U.S. Begins to Reopen
FRANdex: Federal Assistance Helps Franchises Recover From COVID-19 Impact »