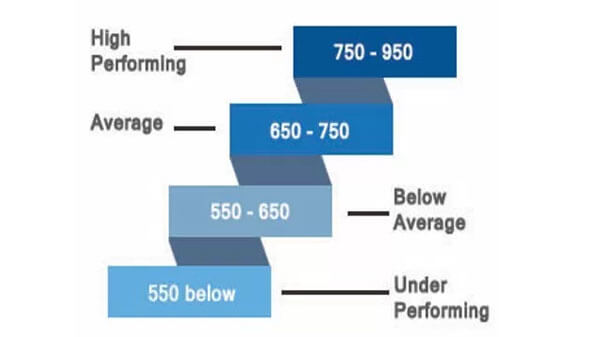 Possessing franchise information going back decades, FRANdata was in a unique position to assist the lending community to build an accurate credit risk assessment system for franchise brands.  With lots of input from experienced franchise lending institutions, FRANdata developed a model that measures credit risk in franchise brands.  Applying this model to more than 500 brands, a predictable pattern between loan performance and FUND credit scores emerged.

The relationship between FUND Scores and implied performing loan ranges from this rigorous predictive analysis are:

The technical approach to Implied Performing Loan Ranges is as follows:

The final step was to relate FUND Score results to loan performance.  That was done in two ways.  First, we used SBA loan data, which is the deepest pool of available loan data on specific franchise systems.  To do so, it was necessary to clean up SBA franchise data[i].  We then correlated FUND Scores to adjusted SBA loan performance outcomes.  The result was a very strong positive correlation of .75.

While a correlation of .75 is considered very good, we further examined what would lead to differences in the remaining uncorrelated component.  In addition to demographic and industry factors, we needed to consider single unit/multi-unit factors.  For systems with predominately or exclusively single unit franchisees, the correlation is higher than for systems with predominately multi-unit operators.  As the borrower adds units under one loan agreement or cross-collateralized loan agreements, the correlation was slightly lower because a unit might fail but the loan may or may not continue to perform based on the ability of remaining units to support the loan.

Another factor in the remaining .25 uncorrelated component is that SBA loan programs are intended for higher risk small businesses.  The majority of franchise systems only have a portion of franchisees that qualify and utilize SBA programs.  If conventional and other types of non-SBA loan performance were available and incorporated into the analysis, the correlation is likely to be even higher than .75.

For many years SBA franchise loan performance data obtained under FOIA requests has come with the following disclaimer language: “The data upon which this report is based originates from the lender and is provided on a voluntary basis.  As a result there is no assurance that every loan made to a given franchise is accurately provided which can result in inaccurate performance data provided in this report.  As such this report should not be relied upon as providing true and accurate data on any franchise listed.”

By comparing SBA franchise loan data with FRANdata’s lists of franchise unit ownership, FRANdata is able to associate specific loans with the correct franchise brand and did so before back-testing was undertaken.