FRANdata tracks all franchise brands in the US and almost nothing gets us as excited as when we see new groundbreaking concepts entering franchising, and that includes international brands entering the US.

This chart is an outcome of our quarterly New Concept Report. One of the data points we include in each quarterly report is “country of origin” for each brand. Since we identify 200-300+ new brands each year, about 10-15% of them are international brands. As the chart shows, we’ve been seeing a consistent uptick of new international brands since 2017 with an unsurprising downturn in 2020 due to the effects of the pandemic. We  predict that things will begin trending upwards again for this year and the next couple of years as multinational brands restart their global growth plans. 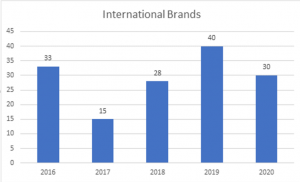 Here are a couple of international brands we’re keeping our eyes on:

Learn more about the New Concept Report here. You can also view our post from the archives on the 5 Common Mistakes Franchisors can Make in a Global Expansion.